I swear that is what this dish is called. It is a type of Suet Pudding which my English Grandmother made it all the time. When I was newly married she passed her recipe on to me. Grandma was born in 1894 and this was made by her mother for the boarding house she ran in Ramsgate England.

Please, if you do decide to make this, have the paramedics standing by to jump start your heart! I'm including it here in Ollie's Yummy in Your Tummy because it's a genealogy ancestor recipe. I haven't made Spotted Dick in years so the only photo I have is from the Internet

Mix flour and suet in equal amounts. (Yes Suet - like you feed to the birds!)

Add enough water to mix until it all holds together

Add raisins or dates if you want to make Spotted Dick. If you are making plain suet pudding, don't add them

Take a tea-towel (does everyone know what a tea-towel is? My American friend Kathi did not know) and spread it on the counter, then roll out the mixture and roll it up inside the tea-towel like a jelly roll

Pin the ends together so it doesn't fall open

Serve warm or cold with custard on top. Grandma's mother (my great-grandmother) served her Spotted Dick cold with butter and brown sugar, sure to be an instant heart attack!
Desserts Family Recipes Spotted Dick Suet Pudding 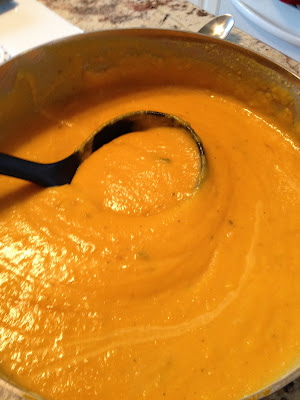 Squash Soup This soup is wonderfully rich, creamy and ever so subtle with flavour. It smells fantastic as it's cooking and it freezes well. The original recipe was on Chow and I only made minor changes INGREDIENTS    * 4 pounds whole butternut squash (about 2 medium), halved lengthwise and seeds removed    * 2 tablespoons unsalted butter (1/4 stick)    * 1 medium Granny Smith apple    * 1/2 medium size onion    * 8 medium fresh sage leaves or dried    * 2 1/2 cups chicken broth    * 2 1/2 cups water    * 1 1/2 teaspoons kosher salt (more if needed)    * 1/4 teaspoon black pepper (more if needed)    * 1/3 cup heavy cream (more if needed). I used whipping cream the first time I made this recipe and it was amazing yummy but very rich so we could only have a small cup of soup. The second time I used half and half (coffee) cream which is 10% and that was perfect.     * 1/2 cup toasted pumpkin seeds for garnish (optional) Here are my two Butternut Squash that I hav 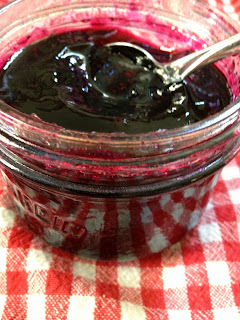 We have a lot of wild grapes growing on our property. But every year we miss our chance to harvest them! So this year I made sure we gathered one bucket full so I could try making Wild Grape Jelly. I have to say it was easy (but messy!) and it tastes amazing. But please be sure you are picking wild grapes! There is a similar poisonous plant . If you are not sure of the difference see this website for an image of the edible grape. One thing to check is the seed - edible wild grapes have a round seed but the poisonous look-a-like has a crescent shaped seed. The leaves are quite different too, with the poisonous plant having smooth edged leaves while the edible grape vine has more jagged edges. Poisonous Plant Leaf Edible Wild Grape Plant The time-consuming part of our jelly making was hubby's obsessive washing of those grapes. He flushed out tiny spiders and a couple of snails, then washed the grapes thoroughly. We didn't bother removing the stems, but hubby 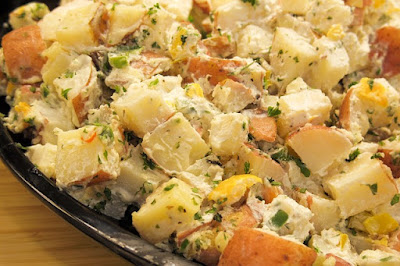 My husband's grandmother gave me this recipe and it's one of the best Potato Salad's I've ever had.  I watched her make it and she mixed everything in the same pot the potatoes were cooked in - with the heat on as low as it will go.  She insisted that the potatoes must be dry after being drained from the water and that this is the only method that works to create the best potato salad. Potato Salad a la Kak   Cook 6 big potatoes in boiling water for about 20 minutes. Drain them. They must be very dry (see my note above). Break the potatoes up with a fork (rough chunked) Cook 4-6 eggs hard boiled and chop them up roughly. Add about 4 Tbsp of Mayonnaise, salt and pepper to taste and about 1/4 tsp Dry mustard for zip. Chop up green onions (about 2) and thinly slice 1 celery stalk. Mix everything in with the potatoes and serve cold.